This is not offered as a tutorial. It is offered as a reminder to those who have received personal instruction from a professional.

Be Prepared with These Items

Though controversial, the risk of loosing a beloved pet due to not keeping their wings clipped is much more devastating to both bird and pet owner than the possible mental trauma to a bird of not being able to fly. A pet bird on the loose, on its’ own is not an escaped bird, it is a frighten bird, lost, and most likely will be a dead bird.

All baby birds should learn how to fly, and fly confidentially before having their wing feathers trimmed one at the time. Flying build confidence and muscle mass. Babies should be allowed to fly in a safe environment and then have one wing feather at a time clipped AFTER they have learned to land safely and to control their flight.

You will need to check your birds wing feathers and toes on a regular basis to determine the readiness for additional clipping and trimming. You can learn to trim and clip from your vet or have your vet do the grooming, usually for a small fee. Caution; Many birds seem to fly away the day they are being taken to have their wing feathers trimmed. Be careful. This is not the day to get careless.

Most pet bird owners are capable of trimming wing feathers with a few instructions. It is a squeamish task and I always hate to trim these beautiful feathers. But, it does not hurt anymore than having your own hair cut. Like a child’s first haircut, most birds will react with fright. It is your job to reassure them and if you trim them often and gently many birds will hold their wings and toe nails out for their trim without hesitation.

Before trimming wing feathers or toe nails you need to look for blood feathers or veins in the nails. A blood feather is a new, growing feather, which has its own blood supply. The shaft is the straw-like structure the feathers are attached to. If it is a blood feather it will look cloudy and purple or red colored. Never cut a feather that is covered with a white plastic type of sheath. These are new feathers and should have blood in them. You are looking for mature feathers. Cutting one at the time will take longer but will help to insure that you cut only as needed.

IMPORTANT: If cut, a blood feather will act as a straw to pump blood out of the bird. The only way to stop this is to pull it out with needle nose pliers. To do this you must grip tightly at the base of the blood feather and pull. This is frightening and dangerous. Grip the base of the feather tightly with the needle nose pliers and give it a quick, straight yank out. It is like pulling a tooth. You must not pull or yank at the end of the feather.

BE PREPARED: Have quick stop available in case of a mishap. Warning; do not let a bird ingest Quick Stop. It is poisonous if swallowed. Because of this I usually have a bowl of pancake mix available. Pancake mix, or biscuit mix, or flour if nothing else is available, will coagulate the blood without danger to the bird. As with any natural remedy, it may take a little longer and if the bleeding is profuse use Quick Stop anyway. A bird can quickly go into shock from blood loss. Also have a towel available to quiet your bird and hold him securely as you would bundle a baby. Comfort him and keep your wits about you. You need for the bird to stay as quiet as possible to slow the blood flow.

CAUTION: If you have cut a blood feather or a toe and the bleeding does not stop when you pull the feather, or by using a compound, or slowing with ice or compression call your vet right away.

Both wings should be trimmed evenly. Uneven clipping will cause the bird to loose control when he attempts to fly and land and possibly do more damage than not trimming at all.

This diagram (Used with permission) and the instructions are provided as a guide for the pet bird owner who has been instructed and training by an experienced breeder or vet as to wing feather trimming. Do not attempt to trim your birds wing feathers alone or without proper training. Until you have been shown how to do this several times you should not attempt to trim your bird at all. 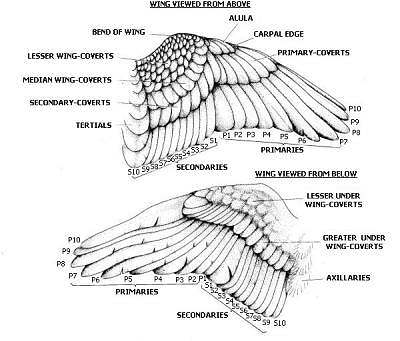 You should have a competent assistant, who as well as yourself understands the wing shape and terminology of its feathers. The PRIMARY COVERTS, SECONDARY FEATHERS AND SECONDARY COVERTS on neither wing should never be clipped.

Toweling your bird as you would wrap a baby is important to prevent injury. The birds’ chest must not be restricted, because it can't breathe. The head, both feet and opposite wing should be well restrained for the birds safety by your assistant. Gently towel your bird and hold it by the head with its stomach down. The proper way of holding a birds head safely is with your pointer finger on the top of the head with your thumb on one side of the birds face and your middle finger on the opposite side of the birds face. Apply pressure carefully on the top of the birds head with your pointer finger in order to control its head and to avoid being bitten.

Carefully open one wing so you are looking down at it from the top. The wing should be held at the base of the wing and at the bend, not by the feathers. Serious injury can occur if the bird should flap his wings.

Scissors or claw clippers that are very sharp are extremely important to get a smooth neat cut. Each feather can be trimmed individually.

The two most common trims are the Show Cut and the Baby Cut. The Show Cut gives the appearance of a fully feathered bird when the wings are at rest. Trimming off P1 to P6 of the primary feathers up next to the bottom of the next layer of feathers is considered the show cut. The disadvantage to this cut is that some birds can still fly and others may flap their wings enough to make these remainder feathers appear ragged without the support of the rest of the feathers.

The Baby cut is achieved by trimming off P10 through P6 of the primary feathers up next to the bottom of the next layer of feathers. This leaves the appearance the bird had before his wings were fully developed. Few birds can fly with this trim.

While trimming either cut slightly curve inwards towards the end of the wing. This will give your bird a neat appearance when its wings are folded.

After clipping your bird it should be given a test flight to see if more primaries need trimmed. This should be done in a bird safe room and on a carpeted floor.

CAUTION: Birds can become irritated by half clipped feather shafts poking them when their wings are at rest. This could lead to feather plucking problems. Observe your bird’s behavior. If he or she is picking or scratching under their wing, on their sides, feel the trimmed shafts for sharp barbs or split or chewed feather shafts and trim as needed.

Carefully clip only a small amount of the nail at a time. With dark nails it is difficult to see where the blood vessel stops. Stop immediately if you cut into a blood vessel and apply a coagulant.

If the nails are extremely overgrown take up to a week or longer if necessary to accomplish the nail trim. Every few days trim off a small amount in order to give the blood vessel a chance to recede between cuttings. Be sure if your bird bleeds, even after applying a coagulant that all bleeding has completely stopped before leaving your bird unattended.

copyright  © 2003. The contents of this site may not be used/copied/shared/reproduced without written permission of AZParrots